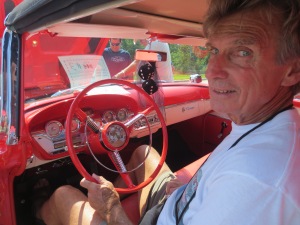 The Ford Edsel is widely known for being one of the greatest marketing flops in history. It had a brief run from 1958 to 1960. But not everyone gave up on the Edsel, as Rachel Otwell explains: 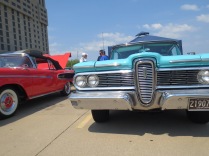 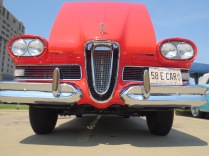 Joey White-Swift is from Waco, Texas. He came to Springfield for the Edsel Owners Club‘s 45th Annual Convention. He’s collecting votes for the 15 cars on display.

WHITE-SWIFT: “When I was ten years old we saw an Edsel driving down the highway and my mother pointed at it and she told me that I will never see another one of those cars again. And it was at that point that I said, ‘That’s the car I want.'”

The Edsel was a running joke long before White-Swift was born. He turns 16 next month, he has yet to procure his dream car. While most his age would want a new vehicle, he says the Edsel’s uniqueness appeals to him – that it was ahead of its time. Whiteswift says he wasn’t into cars, until he became obsessed with this one.

WHITE-SWIFT: “It appears everywhere I go, I sell people on the Edsel. I started with my family, I sold my father on it for sure, he wants an Edsel now. So we’re already going to have to get two.”

A few steps away, Herb Wiese from Kildeer in Lake County is showing off his 1958 Edsel Pacer convertible. It’s rare. Less than 2,000 of this specific model were ever made. The car is red, with black detailing on the outside and white and red vinyl seats on the inside.

WIESE: “The engine, everything was original, with a few personal additions from the previous owner … we took those off, we brought everything back to the original…”

Wiese says he likes the car for its clean lines. He’s entered it in a couple of contests – it won best in show at both. It has a bit of a boxy look, with the signature 4 headlights on the front and two vertical oval shapes in the middle of the grill; features that set the Edsel apart.

This is Wiese’s first and only Edsel, he says he had friends in high school with one, and they were often laughed at for it. And, as Wiese explains, it’s taken a while for the car to grow on his family as well:

WIESE: “My wife won’t let me have too many cars, if I get another one it has to be a ’57 T Bird, so that’s the next one.”
OTWELL: “Why not go with the T Bird in the first place?”
WIESE: “I was supposed to, and when I came home and brought this my wife said, ‘What’s that!? I’m not getting in that.’”

Mike Knisley is from the western Illinois town of Mt. Sterling. He’s sitting under a tent, surrounded by Edsel car parts that he’s cleaning with paper towels and Windex. This stuff belonged to his dad, who passed away earlier this year.

KNISELY: “He had a ’58 when he started, and then it became an obsession, now he has all kinds of ’em … we’re selling ’em all off.”
OTWELL: “And, were Edsels something you were into as well?”
KNISELY: “No, not at all… (laughing). No it is was never my dream car, but my dad sure loved ’em.”

For Reg Brown, the Edsel is also a reminder of his father who recently passed away at the age of 96. His dad was Roy Brown – the car’s designer. Brown says his dads’ career with Ford was an overall successful one. His skills went to use on other cars as well:

REG BROWN: “If you’re in England everybody remembers the Cortina, because they sold like 3 million of them. But he was also involved in the Lincoln Futura show car 1955, and we all know that as the Bat Mobile.”

Brown says despite rumors about the Edsel being a lemon – groups like the Edsel Owners Club are proof the cars run well when maintained properly. The market failure in the 1950s meant the Edsel was more a case of the wrong car being produced at the wrong time, says Brown. The Edsel’s flop often overshadows innovative features such as warning lights to tell the driver when it was low on oil or if the engine was getting too hot.

Brown, who lives in a boat off the coast of South Carolina, says he started attending car shows in part to set the record straight about the Edsel. And he’s found a community of people across the country who appreciate his dad’s creation as much as he does:

REG BROWN: “A lot of us are a little odd because of the brand that we have chosen. You know, there’s millions and millions of Chevy fans, but there’s only a few thousand Edsel fans, so we sort of stand out … We don’t ask everybody to love them, we just love them.”

And when it’s time to go home from this car show, Brown will get in an Edsel previously owned by his father and drive the 900 miles back to South Carolina.

This entry was posted in Uncategorized. Bookmark the permalink.