Opponents of Jacksonville Developmental Center Get Chance To Air Grievances

Governor Pat Quinn’s administration last night attempted to persuade a legislative panel to sign onto its plan to close the Jacksonville Developmental Center. 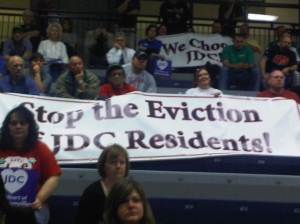 Jacksonville Developmental Center employees, residents, and their guardians protest the facility's closure at a Commission on Government Forecasting and Accountability held Wed. night at Illinois College in Jacksonville; other advocates say institutions should be a thing of the past as community housing options afford individuals with developmental disabilities a better quality of life

But as Amanda Vinicky reports, residents’ families and the central Illinois community are trying to convince lawmakers otherwise.

The center for the developmentally disabled in Jacksonville would be one of the first of the 14 major state facilities, including mental hospitals and a pair of prisons, Quinn wants to close.

Each would have to go through a hearing similar to the five hour long one held for Jacksonville.

Quinn wants to move its residents into community settings … be it an apartment, group home, or back with their families. Mark Doyle is overseeing the transition.

“It’s not a, uh, one size fits all approach. It’s an approach where we’re looking at individual options for persons,” he said.

Doyle says he understands the fear of the unknown is frightening for families. But he gave assurances the state will offer intensive follow-up and monitoring.

Still, parents of the developmentally disabled persons living at the center say their children need the stability of a state institution. Many have tales of previous community and group home arrangements that ended in suffering and abuse.

The closure would also be an economic hit Jacksonville.  State Representative Jim Watson (R-Jacksonville) says the loss of 400 jobs  in the community of 19,000 would be akin to Chicago losing 60,000 jobs “in one fell swoop” – a scenario he says would put legislators from that city into an uproar.

Despite the lengthy hearing, legislators on the bipartisan commission didn’t take a vote, and they may never do so.

Jacksonville’s case is particular; because this is the second time Quinn has proposed closing Jacksonville, there’s confusion about whether a vote’s called for under state law.

Either way , the governor has the power to shut down the center regardless of the panel’s decision.

Same goes for the other 13 major state facilities he proposes closing.